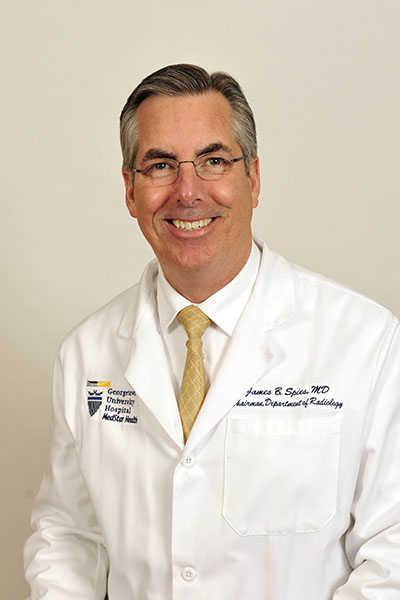 James B. Spies, MD, MPH, FSIR, is professor and chair in the department of radiology at Georgetown University Hospital in Washington, D.C., a position he has held since 2005.

Dr. Spies is recognized as an international authority on uterine artery embolization (UAE) for fibroids. He maintains an active UAE clinical practice and has performed extensive research in that area. Dr. Spies has published more than 100 scientific studies, given more than 400 invited presentations and edited a text on UAE. He continues to actively research uterine artery embolization, measuring outcomes from a range of fibroid therapies. Dr. Spies also serves on the steering committees of the COMPARE-UF trial, the largest outcome study of fibroid therapies in the United States, and the PRESERVE Trial studying the safety and effectiveness of inferior vena cava filters. He also is studying outcomes from prostate artery embolization.

Dr. Spies, who was SIR President from 2014–2015, has been on numerous SIR committees and served as the 2006–2008 SIR Foundation chair. He has been a trustee of the American Board of Radiology (ABR) for interventional radiology since 2016.

Dr. Spies was born in Danville, Calif., one of 10 children. He graduated from the University of California at Davis in 1975 with a degree in enology (winemaking). After a year in the wine industry, he attended Georgetown University School of Medicine, graduating in 1980. He completed his internship at California Pacific Medical Center, San Francisco, and a radiology residency at the University of California, San Francisco. He did a fellowship at New York University School of Medicine in vascular and interventional radiology and holds a Master of Public Health from Johns Hopkins University, Baltimore. Dr. Spies served four years in the United States Air Force and was in private practice for several years before joining the faculty of Georgetown University in 1997.